Customs Hands over Impounded 200 Parcels of Hard Drugs to NDLEA

By Shola Fadeyi The Tin Can Island Command of the Nigerian Custom Service (NCS) has handed over to the National Drug Law Enforcement Agency,(NDLEA) ... 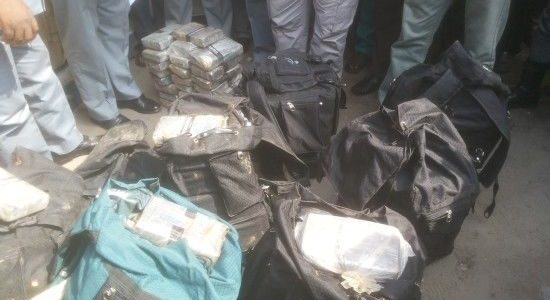 The Tin Can Island Command of the Nigerian Custom Service (NCS) has handed over to the National Drug Law Enforcement Agency,(NDLEA)  200 pieces of ‘unmanifested’ substances, suspected to be hard drugs which it discovered inside a 20 Foot  container used in  conveying  lawful goods referred to as  ‘Virgin ‎Cellulose Tassma for cement application’’ into Nigeria by Nigerite Nigeria Limited.

Unmanifested  goods are regarded as  concealed  items in international trade as they are not declared in the shipping documents  used in importing cargo into the country while they are not also captured by the  Pre Arrival Assessment Report (PAAR)  issued by the Customs for the collection of import duty on goods.

The suspected items were passed to the Agency yesterday by the Customs  so that it can analyse and subject them  to  a test  in its laboratory  and professionally determine what they are  and give a report to the Service later to enable it to  know if the products are offensive  or not  and to assist it to fulfill its mandate , which includes ensuring that prohibitive or injurious items do not get into the economy.

According to the Area Controller of the Command, Comptroller Yusuff Bashar while intimating the Press of the discovery in Lagos yesterday, the items wrapped with white nylon were kept inside eight bags, with 25 pieces in each bag along with the other documented item while the import was processed by  a clearing agent , called Elevation Transaction  Limited .

Bashar disclosed that the container was imported into the country from New Zealand while the ship which brought the good sailed from the Netherlands on his way to Spain.  He also confirmed that    Nigerite Nigeria Limited which was the importer of the product enjoyed a fast track privilege with the Customs.

He explained that the container was discovered to contain the offensive materials on account of thorough intelligence and  inter agency collaboration by the Command  adding that the decision to hand the substance to the NDLEA was in the spirit of the synergy  and effective working relationship between it and other sister agencies.

The Area Controller stated that while the substance had no name with which to identify it, the customs decision to hand it over to NDLEA was because of its suspicion that it was hard drug other than a food or drug product which it  would have turned  over to the National Agency for Food , Drug administration and Control(NAFDAC) or was it arms and ammunitions , which it would have handed over to the State Security Service(SSS).

The Comptroller explained that in the spirit of inter- agency cooperation, the Command has in recent times had cause to hand over seized items to relevant organisations, citing examples of when it had to call in the NAFDAC in the case of  food and drugs , Standards Organizations of Nigeria(SON) as it concerns  goods suspected to have violated standards  and the  SSS  when it impounded goods  relating to arms . Bashar advised the various security agencies to work towards strengthening the process of inter- agency cooperation that has existed between them because o f the dividends that have accrued from such relationship and for the purpose of national development.

Responding to a question on the penalty to be apportioned to the importer of the substances  , if the test of the NDLEA discovered that they  were injurious, the Area Controller said that  the company stood to face  so many sanctions including the loss of its fast track opportunity.

Head of NDLEA at Tin Can Island Port, Danladi Yashim assured that the agency will carry out preliminary test on the suspected cargo  and give the necessary  feed back to  the Customs as soon as possible .But the  Procurement Manager of Nigerite Nigeria Limited, Jonah Amata denied knowledge of the drugs in the container saying  that  the company was oblivious  of the items .