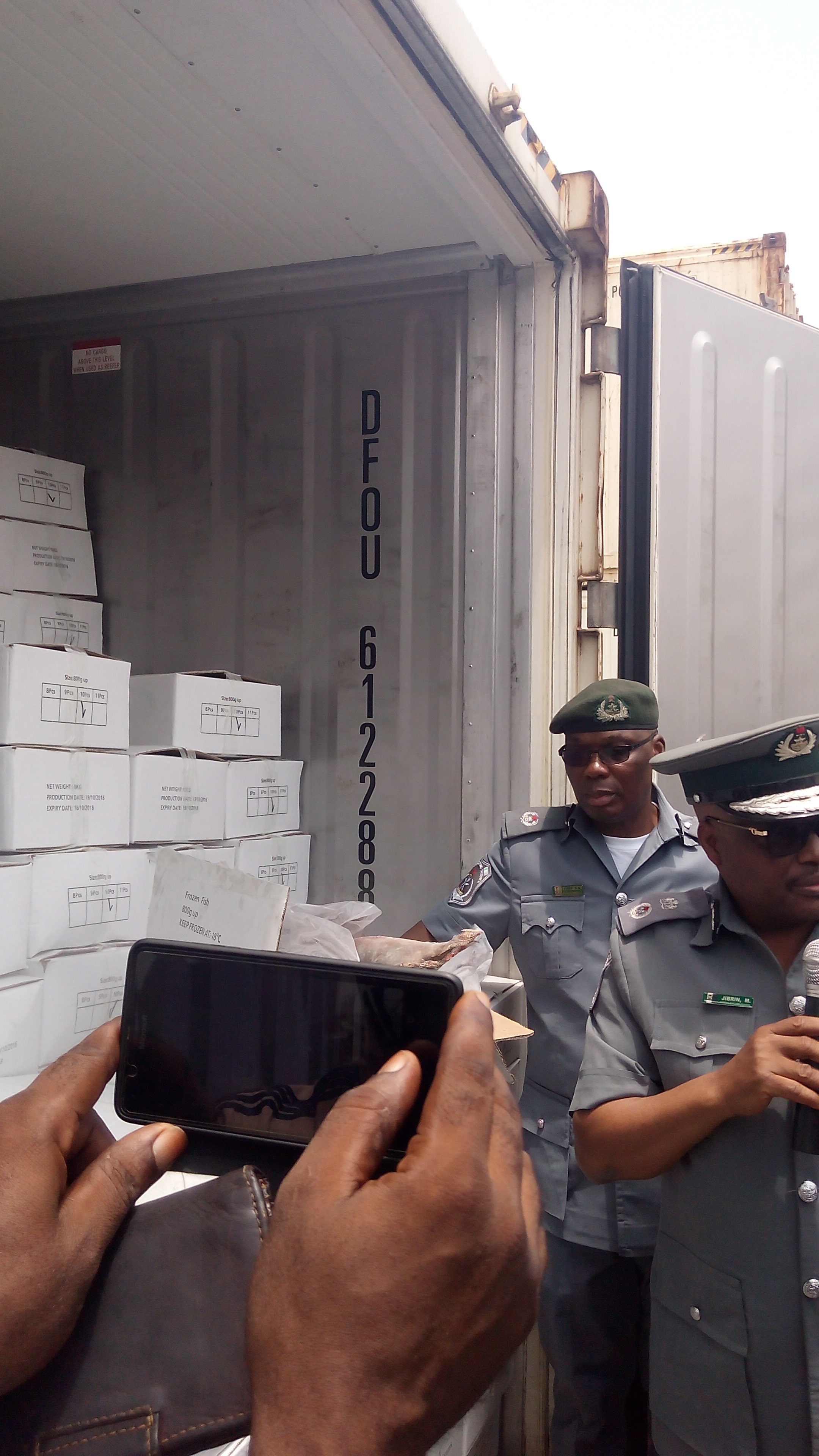 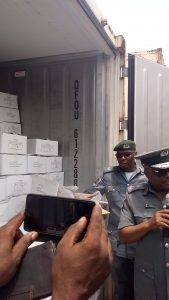 A 40 – Footer Container with number DFOU6122880 laden with 2700 cartons of Tilapia frozen fish with Duty Paid Value of N22, 193,384 but fraudulently declared by the importer as Apple to evade import duty payment has been impounded by the Apapa Command of the Nigerian Customs Service (NCS).

The Container was positioned yesterday by the Command at the AP Moller Terminal in Apapa where it has been kept after examination while the content was opened and showed to some members of the Press along with the Agent who allegedly handled the clearing of the goods.

The Controller of the Command, Comptroller Jibrin Musa told journalist in a press briefing thereafter that the Container, which he said was imported from Turkey would be under seizure until investigation is completed to bring to book all the accomplices connected with the importation.

According to the Controller, the seizure constituted the foiling of another attempt by dishonest importers to contravene the Customs and Nigeria’s extant laws  for the fact that tilapia fish was under import restriction while the importer failed to  obtain license and permit and necessary quota as expected of those who want to bring such species of fish into the country,

He disclosed that the fraud was uncovered during the scanning of the Container by the officers saying that while the Command could not say it has adequate number of scanners, it has endeavored to make good use of the one it has at its disposal.

Musa was of the view that following the seizure of the container, the Command in the spirit of inter- agency collaboration has already opened line of communication with the Agricultural and Plant Quarantine Service, the National Agency for Food Drugs Administration and Control (NAFDAC) over the matter.

Answering a question on how soon it will take the Command to nab the importer of the fish, Comptroller Musa stated that he would soon be arrested especially when the agent is already in their custody while the address of the Shipper is also contained  in the document he submitted for the clearing of the goods.

According to him, in as much as it did not take time for the importer of the 661 pump action rifle and others involved in the importation of the arms to be nabbed , the Command would also ensure that no time was wasted to have the shipper of the fish in its net for further investigation and necessary prosecution.

Also on whether or not the fish consignment would be destroyed later or donated to the Internally Displaced Persons (IDPs) , the Comptroller  said the Command’s role would be to put together its report on the seizure, which would include its advice  and submit it to the Headquarters of the Service in Abuja which will decide what to do with the fish items.

The Apapa Command Controller pledged that in line with the zero tolerance for smuggling and  false declaration policy of  the Comptroller General of Customs, Colonel Hameed Ali(rtd) , the Service will continue to uncover , discover  and stop any attempt  at breaching the law of the country as it concerns import and export transactions through the Command.

He advised all stakeholders relating with the Customs in the Command and elsewhere to be law abiding, warning that no stone would be left unturned at enforcing the fiscal regulations of the Federal Government.

The Controller admonished the officers and men of the Command not rest on their oars at ensuring that they detect any fraudulent acts by importers and agents meant to circumvent the law of the land or evade the payment of requisite revenue to the government.