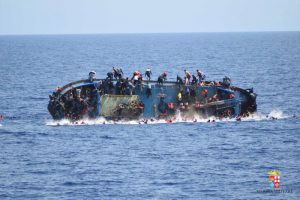 Somali pirates, who hijacked the Comoros-flagged bunkering tanker Aris 13 off the coast of Somalia, are demanding a ransom for the ship’s release, EU Naval Force confirmed.

As informed by the EU Naval Force, the master of the 1,800 dwt tanker said that the ship and crew were being held captive by a number of suspected armed pirates in an anchorage off the north coast of Puntland, close to Alula.

The attack came shortly after the master issued a mayday alert to say that two skiffs were closing in on the ship in the Gulf of Aden.

Upon receipt of the mayday alert, an EU Naval Force maritime patrol aircraft was launched to overfly the tanker and make radio contact with the ship’s master.

Despite hailing the ship several times, no contact was made and the situation on board remained unclear until the EU Naval Force operational HQ was able to make telephone contact with the ship’s master in the late afternoon of March 14.

The master confirmed that armed men were on board the ship and they were demanding a ransom for the ship’s release. The EU Naval Force has now passed the information regarding the incident to the ship’s owners.

The incident, which occurred on March 13, 2017 while the 1990-built tanker was on its way from Sri Lanka’s port of Colombo to the Mogadishu port in Somalia, marked the Somali pirates’ first commercial vessel hijack since 2012.

Gerry Northwood OBE, COO at MAST, a maritime risk management consultancy, and former Royal Navy counter piracy commander, told World Maritime News that it was very likely that such an attack was going to occur with the current political situation in Somalia and the increasing confidence of those transiting through the Western Indian Ocean and Gulf of Aden.

“The characteristics of the hijack are similar to some of the early piracy activity we saw around 2005, and those responsible will have analysed the changing economic and political situation around them and decided that now was an opportune time to launch an attack,” Northwood said.

In a related development, Seventeen crewmembers of the bulk carrier Sea Honest, who were abandoned unpaid and unprovisioned in Algeria in July 2016, have finally returned home, according to the International Transport Workers’ Federation (ITF).

The last group of five Indian seafarers left the ship last week en route to Mumbai. Another eight seafarers were paid and repatriated on February 26 , following the payment and return home of the two Turkish crew members also last month. Two Indian seafarers have been paid and have opted to remain on board.

“The good news is that this long-suffering crew is now being repatriated, and the even better news is that they are now in receipt of the wages they have been owed throughout their long ordeal. These total USD 151,823,” Mohamed Arrachedi, ITF inspector, said.

The Panama-flagged ship is owned by the Turkish company Vera Shipping, which settled the crew wages and has recruited new seafarers on board.