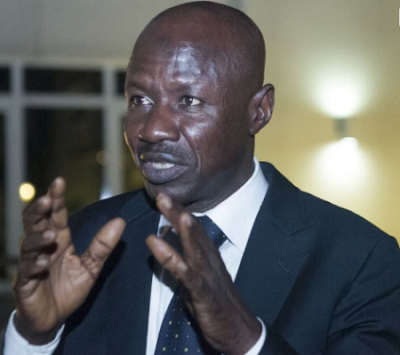 Acting Chairman of the Economic and Financial Crimes Commission (EFCC) Ibrahim Magu whose confirmation was again rejected by the Senate on Wednesday has said that the battle against corruption in the country will continue and that it is a fight to finish .

He said his  non confirmation has not changed anything  as his priority is to fight corruption adding that he has  always been on duty  and that he  will work until the last day because  the Senate rejection nor report from the Department of State Security (DSS) cannot stop him.

Magu faulted  the authenticity of the report from the DSS indicting him and accusing him of lacking integrity to head the anti- corruption agency.

The EFCC boss  who addressed a coalition of civil society groups at the entrance to the National Assembly after his screening said  the greatest violation against human right is crime against the society and the humanity adding that everybody has a duty and responsibility to fight corruption .

“So, we must wake up, where ever you find yourself, fight corruption. Anytime you discover that I am corrupt, expose me.”

Speaking on the allegations from the DSS, Magu said: “those allegations can not stand the test of time because they can not be proven. You know, you can’t just raise mere allegations without giving the person opportunity to answer you. There is issue of fundamental human right and the right of fair hearing is there.

“Up till this time, DSS has not called me and I am even surprised that the same report is coming back and this time around it is signed by somebody. I doubt the genuineness of that report. But I think we need to identify those who have the interest of this country at heart.”

Speaking on behalf of the CSOs, Co-convener Citizen Action To Take Back Nigeria (CATBAN) Ibrahim Garba Wala, said Nigerians and President Muhamnadu Buhari believe in the nomination of Mr. Magu as the chairman of EFCC, hence, the Senate have no choice.