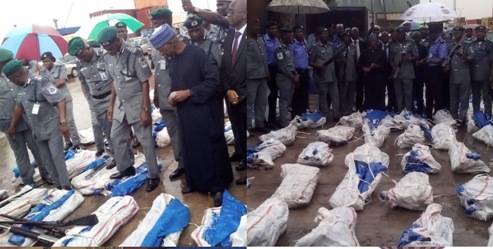 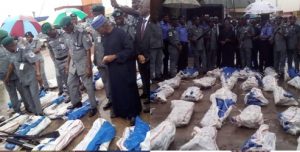 Comptroller General of the Nigerian Customs Service(NCS), Colonel Hameed Ali (RTD)  inspecting yesterday in Lagos  1,100 pump action rifles seized by the operatives of the Service at the Tin Can Command recently.

By Shola Fadeyi
The Nigerian Customs Service (NCS) has pledged to fish out, arrest and subsequently prosecute all those involved in the  smuggling from Turkey of the seized 1,100 pump action rifles by the Service into the country through the Tin Can Port recently.

Its Comptroller General, Colonel Hameed Ali (rtd) made this promise while briefing the media on the impounded arms in Tin Can Command in Lagos yesterday saying the fact that a customs officer who allegedly opened the seal of the container bearing the imports and a tally clerk have been arrested has lent credence to the fact that others associated with the crime would also be fished out.

Ali said the importation of such high number of rifles at a time when Nigeria is undergoing some security challenges is a clear indication that there are indeed some elements who do not believe in the unity ,peace and well being of Nigerians adding that the seizure being the third in the series of arms seizures within eight months of this year presents an all time high of the triumph of the customs over evil forces.

The Comptroller General reminded that the two previous cases of the seized 661 Pump Action Rifles in Apapa Command and 440 Pump action rifles from the Tin Can Command earlier in the year are already in Court adding that he was optimistic that justice would prevail to deter others would be armed smugglers.

The Customs boss said that investigations by the customs has revealed that a syndicate was behind the the smuggling due to the way it was rampant , pledging that the Service has mapped out strategy to burst the syndicate .

Chronicling how the smuggled items were discovered, Ali stated that on September 6, 2017 operatives of the Customs Intelligence Unit (CIU) on a routine monitoring of activities at the terminals discovered, positioned with other containers for the day’s examination a 1×20 feet container with number GESU255208 which was not previously listed for examination .

According to him, the officers also observed that the seal of this unlisted container had already been cut and padlocked making the container to became suspect and thus had to be immediately transferred to the Enforcement Unit .

The Customs CG stated that the Bill of Lading falsely indicates the content to be wash hand basins and water closets while thorough examinations the following day, September 7, 2017 revealed that they were the smuggled arms.

He commended the operatives of the Customs Intelligence Unit(CIU) for a job well done saying that seizures such as the current one that was made is a testimony to the fact that a well reformed and intelligence driven customs will better serve the interests of Nigeria.

Ali  pledged that the current management of the Service will continue to reposition and finetune its operational strategies in line with the Federal Government’s drive towards new and better ways of serving Nigerians.