Hadiza Bala Usman, NPA MD   Some agencies  have been defying Presidential directive and Executive Order that all agencies  should jointly carry out examination... 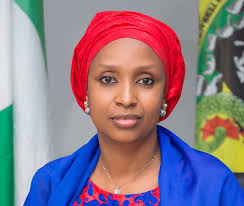 Some agencies  have been defying Presidential directive and Executive Order that all agencies  should jointly carry out examination of goods at one location at the seaports, because  they have not  been appropriately sanctioned for such disobedience by the Federal Government,

The Managing Director of the Nigerian Ports Authority (NPA), Hadiza Bala Usman  who made this observation  when she appeared on a Channels Television Programme, Sunrise, on Thursday  said that apart from NPA , which has been  obeying  the directive, other agencies have been flouting it.

The NPA Managing Director emphasized that an Executive Order was signed in 2017 by the Vice – President,  and it directed all agencies of government to conduct inspection of containers  in one location, saying that there ought to have been sanction for non compliance from the Presidency as the NPA lacks the power to penalize flouting of executive orders.

“If an agency of government violates an executive order signed by the Vice-President, I believe the Vice-President and indeed the Presidency should sanction that agency for non-compliance but that has not been done.

‘’The executive order sought to have all agencies do inspection in one location hence consignees don’t have to have multiple areas of inspection”, Usman said.

The NPA boss said she had reported the matter to the Presidential Council on Ease of Doing Business chaired by Osinbajo but that no sanction had been meted out   to the errant agencies ,arguing  that port operations would not run smoothly, if it is only the NPA that is meeting its obligation.

She said there have been several explanations and justifications for the non-compliance by the recalcitrant agencies, adding that if a directive is given and agencies don’t comply, there must  consequences for action .

Usman complained that a directive was also given by the Vice President  for  all agencies of government  to deploy personnel to have 24-hour port operation, saying that while NPA obeyed other agencies also jettisoned  the order.

The NPA boss said she also   reported the matter to the appropriate authority, but that the offending agencies were not penalized.