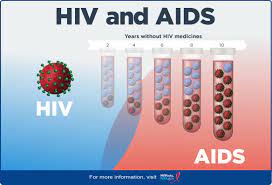 A total of 8.2 million persons were screened for HIV in Nigeria in 2020, despite the outbreak of Covid- 19 pandemic in that year , out of which 350,000 were confirmed to be living with HIV and were put on treatment.

Previously, just over one million persons are screened annually for HIV in the country, out of which between 50,000 and 60,000 persons that test positive are put on treatment.

The Director-General of the National Agency for the Control of AIDS (NACA), Dr Gambo Aliyu, who gave the figures , said this development represents the greatest yield ever by Nigeria or any country in identifying people living with HIV and putting them on treatment.

Aliyu, who spoke in Lagos recently during the graduation of 180 out-of-school youths trained by the Agency in various vocations to lift them out of poverty, said that as a result of this development, Nigeria is closer to controlling HIV earlier than expected.

“Last year, we were able to test 8.2 million persons despite COVID-19 out of which we were able to get 350,000 people with HIV and put them on treatment. “This has never been done in the world before in any country in the history of HIV programming and because of that feat, Nigeria is closer to controlling HIV earlier than expected’’, according to him.

He said it was achieved through a collaborative effort with development partners putting resources and funds together to address HIV in all the nooks and crannies of the country.

According to him, the Agency was we out in the communities and in the facilities approaching people that were living with HIV and also those at risk of acquiring HIV, and convincing them to know about their HIV status and they responded.

He said the Agency made an appeal and Nigerians responded and Nigeria had the greatest yield of people that were positive for HIV and were put on treatment. Lamenting the challenge of HIV control, prevention and elimination in Nigeria, Aliyu said it was important to focus on the youths.

“For the last 20 years, stigma and discrimination have stood between us and the effort of identifying 1.8 million people living with HIV. “In our last survey, we discovered that individuals aged 18-35 years, that is, the youths, are the most vulnerable to HIV infection.

He said that HIV is not only the disease of hospitals, it cuts across sectors, is affected by behaviour especially the social cultural settings, and also affected by poverty. “Poverty is a key indicator of increased risk of insecurity.

”We believe if we create opportunities, these would help put them away from contracting HIV and help them to be self-reliant”. “It will also give us access to them in terms of using them as soldiers for fighting HIV in Nigeria,” he noted.