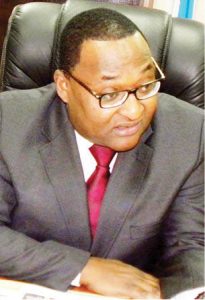 The Executive Secretary/ Chief Executive Officer (CEO) of the Nigerian Shippers’ Council (NSC) , Hassan Bello has said that the Nigerian Seaports are not costly places to do business , contrary to the belief of many in the maritime sector.

Bello who made the clarification in an interview with the Marineandeconomy at his office in Lagos recently ,emphasized that the speculation that Nigerian Ports are the most expensive to do business compared to other ports in West and Central Africa could not have been true.

According to him, there was no way Nigerian Ports would be the costliest ports in the continent because Shippers’ Council as an Economic Regulator of the ports has not approved any increase in cost in the sector , in the last five years.

Bello said a key function of the Shippers’ Council is to regulate charges of stakeholders , pointing out that the Council has however not sanctioned any increase in costs for providers of shipping charges in recent times.

He stated that shipping companies and terminal operators have been approaching the Council for proposals to grant them increase in tariff , but pointed out that the Council has not aceeded to such requests, so as not to add to the cost of doing business at the ports.

Bello said that as part of measures not to give room for high cost in the Port sector, the Council has also been discharging its economic regulator role effectively by checking any arbitrary increase by providers of shipping services.

He disclosed that the reason why  many believe  that Nigerian Ports are expensive could be due to illegal charges that are being collected at the ports.

According to him, since there is no way manual examination of goods will not cause delay in cargo clearing and encourage corruption , government has thus begun to procure scanners for the Nigerian Custom Service to examine containers .

He also advised importers to always endeavour to be compliant at all times in terms of the payment of the requisite import duty to the Federal Government on their goods in order not to give room for extortion at the ports, when their documents are queried and delayed by the relevant government officials.

Bello said when the official costs , tariff and charges collected by stakeholders at Nigerian Ports are compared to what obtains in other countries in African , it will be discovered that the Ngerian ports are not costly ,while they are not the most expensive in the continent .