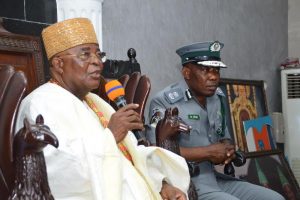 R-L: Comptroller Dera Nnadi during his visit to the Paramount Ruler of Egbaland, HRH Adedotun Aremu Gbadebo III as part of his Command’s synergy efforts  with stakeholders.

When the aphorism, the good ones will shine even in darkness was coined, it probably had people like Comptroller Dera Nnadi in mind , because of his exceptional qualities , which make him to give more than a good account of himself and shone like a million stars , in any position he finds himself.

Nnadi has overtime proved to be a versatile , very knowledgeable , dutiful , humble but firm  very committed officer  ,  as well as  an enforcement guru    Considering the various positions he has occupied and the legion of special assignments he has handled, Nnadi is undoubtedly one of the young and very bright officers that have contributed immensely to the growth and advancement of the Nigerian Customs Service (NCS).

Little wonder that ovation was at the loudest for him , when he was promoted to the rank of comptrollership ,the highest position carrier wise   in  the Customs in October this year . Though  he  merited it , but many in the  maritime and customs circles saw the honour as a compensation for his years of meritorious and exceptional service to the NCS.

Well trained,urbane, suave, intelligent, very unassuming , but always down to earth ,  Nnadi has indeed proved himself worthy and a great asset in the various positions he has served  in the    Customs.

As the Public Relations Officer of the biggest Customs Command  in Nigeria, the Apapa Command,  he distinguished himself and succeeded in establishing  a very positive image        for the customs and  the Controllers he served then, among which are    Talatu    and  Azarema who both  later went on to become Deputy Comptroller Generals (DCGs) of the Customs.

It was not a surprise that he later   went on to be a Special Assistant to one time Acting Comptroller General of the Customs, a position , where his knowledge on customs affairs did not only  robbed of positively on his boss performance, but on the output of the Service generally.

Sequel to his promotion as a Deputy Comptroller (DC) ,he later emerged as the DC Enforcement of  the Tin Can Command of the Customs  ,    a position where he utilised his versatility as a good manager and             a thoroughbred enforcement officer to the benefit of the Customs.

As the DC of Customs , it is on record that   Nnadi did not only make seizures of  consignments which owners  tried to underpaid duties to government , he ensured that requisite import duty was paid on them and others ,  thus recovered billions of naira for customs , while he  contributed to the enhancement of revenue generation at the Command during his stint.

However, for the fact that      Nnadi is blessed with brains , a development that has made him to distinguish himself in the administration and operational areas of the customs , albeit through the series of training and exposures he has had in the customs ,and as a result of his natural intelligence.

This explains why apart from being an endorsement czar , he has also proved to be an ‘intellectual’ in customs what, with his transverse  of the length and breadth of Nigeria, delivering one lecture or paper or the other on customs operations and procedures .

The Customs hierarchy having fished him out as an ‘egg head’ with the necessary potentials  has continued to use him to propagate the positions of the Customs as the organ of the Federal Government implementing its fiscal policies   and the place of the Service in the areas of duty payment, tariff  classification, valuation , customs international conventions, among other such        technical issues pertaining to the Service.

Thus to demonstrate the  value attached to Nnadi and its  importance  in Customs circle, even as busy  as  the DC Enforcement in Tin Can, DC Administration in Ogun Customs 1 and more so now as the Controller of the Command , he has consistently represented the customs hierarchy in different fora as an intellectual .

A serial achiever in  every position he has occupied  and assignments entrusted to  him , Nnadi has again proved this as he has been able to record seizures worth over N172 million in Duty Paid Value (DPV)  in just five weeks of its assuming office as the Controller of the Ogun 1 Command.

This feat was made possible through his usual style of administration as an enforcement officer with preference for adherence to the rules of engagement, effective information gathering , reliance on intelligence , collaboration and synergy with relevant civilian and security stakeholders.

This also explains why in less than two months of being a Controller ,he has been able to draw a blue print and a road map of peace and cooperation with the relevant stakeholders aimed at ending the incessant crisis and killing of officers and civilians in the axis, over efforts of the customs to carry out its lawful duty of checking smuggling activities, in the domain.

It is thus not a surprise that he has had to bond and collaborate with the different segments of people , namely the youths, elders, the traditional rulers and even the government of Ogun State.

It is good he has embarked on the enlightenment of the youths     , because of their strength and energy which make it easy for them to form , the large percent of the smugglers, on the need for them to steer clear of smuggling because of the inherent dangers , while also relying on the elders who are the fathers, to keep their children and wards in check.

His visits to the traditional rulers and the  chiefs in the Ogunn axis    coupled with his invitations to them  are also very Germaine  because of their positions as custodians ,  influencers    and leaders of thoughts who have the capacity to give directions and directive to communities and domains, will also go a long way to changing  the narrative ,and the tag of the Ogun Area as a ‘war zone’ , for smuggling ,     to that of a peaceful economic zone.

However , as he seeks peace and collaboration, it is also a step in the right direction that  he has sounded  a note of  warning to the smugglers to abandon the illicit trade ,as they would be caught and prosecuted  if they persist.This is because no matter the rhetoric, hardened criminals ,for instance smugglers     , who have taken the nefarious trade as a source of livelihood , will not change.

The Controller will also achieve more success with better training and re- orientation of his officers so that they will be more professional    when pursuing smugglers due to the chances of having innocent people killed by stray bullets. This is because , it is only  when incidents of collateral damage and deaths of civilians can be curtailed ,that communities will take customs officers as friends .

But the Controller should also make his interactions with the communities as frequent as possible , while he must make it a sing  song, that they should cease to kill officers as some of them are their kith and kins ,as well as innocent Nigerians like them.

Controller Nnadi will also  do well to sharpen his level of collaboration with sister security agent s and government agencies in the State, particularly in the areas of intelligence and information sharing.

His open door policy, ability to take decisions, his firmness , determination , experience , knowledge, increased level of synergy and effective enforcement among others which are combined factors  that have made him tick    will definitely ensure his success in his ongoing onerous assignment like before.