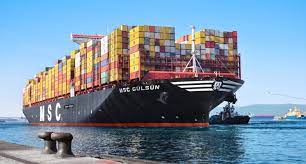 Swiss-Italian shipping line Mediterranean Shipping Company (MSC), currently the world’s largest ocean carrier, has decided to re-route its ships on the west coast of Greece in a swift action to reduce the risk of collision with endangered sperm whales in the Mediterranean.

According to the company, the decision followed the discussion with four major environmental non-governmental organisations (NGOs) and MSC is now the first major shipping line to re-route all of their container vessels in this area to safeguard the critical habitat for the sub population of whales.

Critical action like this is urgently needed in order to protect the remaining 200 to 300 individuals that remain, MSC stated.

Studies on the eastern Mediterranean sperm whale population by the International Fund for Animal Welfare (IFAW), OceanCare and WWF Greece in collaboration with the Pelagos Cetacean Research Institute identified the Hellenic Trench, to the west and south of the Peloponnese and southwest of Crete, as critical habitat for these whales.

As explained, the deep-diving whales are found in the area year-round and they concentrate around the 1000-metre depth contour – directly in the path of busy shipping routes.

“As a global leader in container shipping and logistics, we have a responsibility to ensure that our cargo operations make a positive impact, reflecting our longstanding commitment to conserving and protecting the ocean and marine wildlife”, said Stefania Lallai, vice president of Sustainability at MSC. “Collaborating with NGO partners is key to understanding and taking action to protect endangered sperm whales along the Greek coast”.

As the above mentioned area is currently the company’s route, the action is said to make a substantial contribution to the survival of these at-risk whales.

“The whales found dead on the shore with propeller marks and cuts are just the tip of the iceberg. Up to 20 times more die offshore and are never recorded. We are also seeing fewer whales in our yearly research surveys than in previous years, which is a huge concern”, explains Alexandros Frantzis, scientific director of the Pelagos Cetacean Research Institute. “It is our fear that without urgent action, deaths through ship strikes will cause this already small population to go extinct very soon”.

The NGO coalition urged other shipping companies to follow similar leadership as ship re-routing is required now to reduce the ship strike risk to sperm whales by almost 75%.