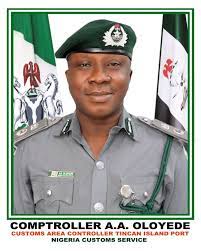 The Customs Area Controller of the Tin Can Island Command , Comptroller Olakunle  Oloyede has  implored the  heads of security and regulatory agencies to push for full automation so as to be integrated into the Customs  platform  for Ease of communication and effective regulation.

This, he said would make them to be  like the Standard Organization of Nigeria (SON), National Association of Food ,Drugs Administration and Control (NAFDAC)  and  National Environmental Standard and Regulation Enforcement Agency (NESREA) which are already on the platform.

He made the plea yesterday at the Command’s headquarters in Tin Can , Lagos , during the  continuation of his sensitization and awareness lectures on the raging controversy of VIN Valuation Policy.

He  solicited the support of all Security and Regulatory Agencies and urged them to ensure intelligence/Information Sharing as the task of Nation Building is a collective responsibility.

The Controller also  called for the understanding of sister agencies for the actualization of his mandate.

Oloyede  used the platform to formally familiarize with heads of Security/Regulatory Agencies and to brainstorm on issues that may be affecting the existing relationship between the Service and Sister Agencies with a view to re-jigging and strengthening collaboration and synergy.

He  gave  an overview and historical perspective to the deployment of VIN Valuation and VREG Policy,stating  that the VIN Valuation Regime provides for transparency and simplification for both the Importer and the Customs as it has tendency of mitigating corruption as a non intrusive module.

Oloyede  stated that the VIN Policy is in tandem with the Arusha declaration and Kyoto Convention to  which  Nigeria is a  signatory.

On the VReg Policy, the CAC informed participants that it ensures that stolen cars will not have access to our clime amongst other benefits of accountability as the Service are oftentimes  inundated with requests for retrieval of stolen vehicles by Interpol.

Speaking further, he stated  that the nature of Global Trade advocates for full automation and simplification of Customs Clearance is  in accordance with article 1 of the Trade Facilitation Agreement (TFA) and noting  that the Service engaged with stakeholders through series of Webinar and Publication before deployment of the VIN Valuation Policy.

The Customs Area Controller specifically said  that the impasse on VIN Valuation was consequent upon misuse of procedure pertaining to inappropriate code usage for Standard and non- Standard VIN.

The Port Manager and other heads of Security/Regulatory Agencies assured the CAC of their unalloyed support and thanked him for educating them on the VIN Valuation issue.

Nigerians Should Avoid Foreign Rice, It is Poisonous, Causes Cancer -Customs FOU ‘A’