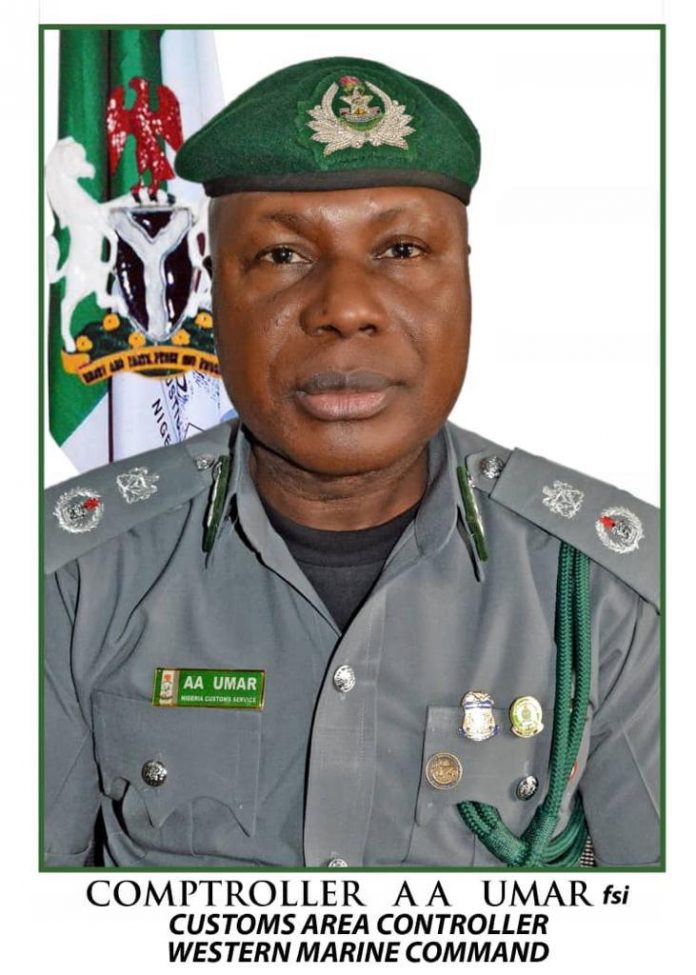 The Nigerian Customs Service (NCS) has stepped up its policy of effective   monitoring and patrol  of   the waterways and creeks  in  the country, as part of measures to nip smuggling through such sources , in the bud , check importation of contraband into the Nigerian economy, and ensure that requisite duty are paid into the government coffers on imports .

Consequently,   this has explained the emphasis  which the Customs  places, on the choice of who would be the Controller of the Western Marine Command – in charge of the waterways and  creeks in the South Western part of Nigeria , because of their vastness  ,and thus the  need to deploy an able , well experienced  , trusted and disciplined officer for the onerous assignment and the position.

However , just some few months down the line,  when  the mantle fell on Comptroller Abubakar Umar on February 21, this year, as the Controller  , his management of the Command, in the realm of seizures and its anti smuggling activities, have indeed shown that ,he has been  a round peg in a round hole, for the position.

For the fact that he was formerly the Comptroller Discipline at the Customs Headquarters in Abuja , little wonder that his charge to the officers of the Command ,  when he assumed office,  was for them , to rededicate themselves to their statutory responsibilities,  be disciplined, and work according to the codes, procedures, departmental instructions ,and laws as enshrined in the Customs and Excise Management Act Cap C45 2004 as amended.

To show , that the officers and men have inculcated Comptroller Umar’s  instructions , coupled with their capability , commitment to work , and the   encouragement he has given to  them ,  among other factors, have combined to make it possible for the Command  to discharge its mandate effectively , since the few months that Comptroller Umar took over the management of the Command.

This is why the Command was able to impound  1,437 Kilograms of Cannabis Sativa , popularly known as Indian Hemp or Marijuana  stuffed  in 32 sacks  worth  N160m , as well as  seized  other Illegal Goods valued at N190m In duty paid value  between February,  2022 , when Comptroller  Umar assumed duty as the Controller, and May this year.

To demonstrate the effectiveness of the Command , the seizure of the Cannabis Sativa was made  in March 30, 2022 ,not long after the Comptroller took over the reins of office, as the officer.

Thus  its officers,   acting on   credible intelligence, accosted the  wooden boat carrying the Cannabis Sativa  at Oko  Aja Beach ,in Lagos State, took control of it ,  following which it transported it to its office in Lagos , inspected the content of the sack, and discovered that it contained the prohibited item.

However , as an attestation  to the spirit of  inter agency  collaboration, which  has been key in the success of the Command ,  Controller Umar  had to, hand  over the seized Cannabis  Sativa, to   the Commander, Marine Unit of the National Drug Law Enforcement Agency (NDLEA),  as encouraged by the Customs Comptroller General, Colonel Hameed Ali (rtd).

To prove that  the Command  has a legal backing for embarking  on the seizures , the activities of the Controller has thus been based on   the  Provisions of Section 149 (Powers to search vehicles/ships and Section 158 (Power to Patrol Freely) of Customs and Excise Management Act (CEMA) Cap C45 Laws of the Federation of Nigeria 2004 as amended.

The Command’s success so far ,  has also been influenced by its effective use of intelligence , collaboration with other security agencies , particularly the National Drugs Law Enforcement Agency(NDLEA) , the National Agency for Food , Drugs Administration and Control(NAFDAC) and the logistic support from the Customs Headquarters.

However despite the feat that has been recorded by the Command, and as  a credence to  its   doggedness in the anti-smuggling war, it is encouraging that it will  continue to ensure that it  pursues smugglers to their trenches,   while it is also a good development that it has advised the smugglers  to turn a new leaf and embrace legitimate trade, so that  they can also  contribute their own quota  to the GDP of the Nigerian Economy.

Additionally, it is also good , that the Controller has been   strengthening , the existing collaboration between it,  and other sister agencies to achieve greater efficiency and curb the menace of smuggling, along the South Western waterways and creeks, while it has continued   its engagement with the traditional and community leaders, as well proceeded to solicit their   assistance  to intensify their efforts  at  talking to their subjects to shun all  acts of smuggling.

However , for  the fact that Controller   Umar has continued to  operate  an open door policy , to  give a sense of belonging to all officers/men  and instill   discipline among them ,as well as  engage in an   intensive patrol and  surveillance of the waterways and creeks  the implication is that ,  the days of the smugglers , intending to ply  their illicit trade on the waterways, within the jurisdiction of the Command  are  indeed numbered .