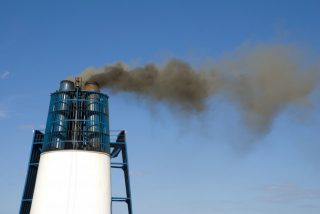 Out of the 28 financial institutions reporting their emissions data in the third edition of the Poseidon Principles Annual Disclosure Report 2022, seven banks are aligned with the IMO’s ambition of halving shipping’s GHG emissions by 2050.

The Poseidon Principles are a global framework for assessing and disclosing the climate alignment of financial institutions’ shipping portfolios pioneered in 2019 by Citi, Societe Generale, and DNB with the support of the Global Maritime Forum.

The voluntary regulatory framework aims to accelerate the implementation of the sector’s green agenda while charting a path forward for banks to decarbonize their own portfolios as well.

The framework is applicable to lenders, relevant lessors, and financial guarantors including and export credit agencies. They must be applied by signatories in all business activities that are:

Credit products – including bilateral loans, syndicated loans, club deals, and guarantees – secured by vessel mortgages or finance leases secured by title over vessel or unmortgaged ECA loans tied to a vessel; and

Where a vessel or vessels fall under the purview of the International Maritime Organization (IMO) (e.g., vessels 5,000 gross tonnage and above which have an established Poseidon Principles trajectory whereby the carbon intensity can be measured with data from IMO DCS)

This report collates data reported by 28 signatories for their activities throughout 2021. The data is then compared to a decarbonisation trajectory for the same year to show whether, at that point in time, a ship finance portfolio was compatible with a 50% reduction of emissions by 2050.

The simple average score was +9.7%; the average of all the reported climate alignment scores calculated with each score being assigned equal importance. Signatories’ scores ranged from -12.5% to +57.3%, with 14 having a score of +5% or less.

The results show that four cargo vessel portfolios were aligned with the IMO’s Initial GHG strategy, representing a third of the results. Their simple average score for their cargo vessels finance portfolio was +0.8%.

“This year’s reporting is the most granular and extensive yet, and more banks have joined the initiative, which is very encouraging. I am pleased that signatories have been willing to be even more transparent about the makeup of the carbon footprint in their portfolios. Being transparent is the only way we can make change happen and better support clients in the crucial years for shipping decarbonization ahead of us,” says Michael Parker Chairman, Global Shipping, Logistics and Offshore, Citi, and Chair of the Poseidon Principles.

Parker is not discouraged that only a minority of reporting banks are aligned with the 2050 target.

“We are on a multi-year journey, but with this data we can see our performance, and support our decision-making with insight. Reducing GHG emissions has become a priority in the maritime industry, including for ship finance. However, ships have a 20+ year lifecycle. It will take time for this trend to be reflected in our portfolios, even with the banks favouring low-carbon projects,” he says.

More than 70% of the portfolio

The Poseidon Principles were launched in 2019 with 11 founding members and have since grown to 30 financial institutions covering more than 70% of the global ship finance portfolio. Three signatories joined after December 2021 and are not required to report this year. One bank chose to do so, nevertheless.

“I would like to welcome the five new signatories who are reporting their climate alignment scores for the first time this year. We continue to receive strong support for data sharing and transparency among our clients, a sign that the Poseidon Principles have become an established and recognised initiative,” added Paul Taylor, Global Head of Maritime Industries, Société Générale, and Vice Chair of the Poseidon Principles.

This year’s report also introduces more granularity in the data reported. In addition to their overall portfolio climate score, 14 banks disclosed individual scores for passenger vessel portfolios, cargo vessel portfolios, or both. This data generally shows that COVID-19 continued to have a negative impact on the climate scores because of congestion and the slow recovery in the cruise business with much shorter cruises as the sector started to resume activity.

In September 2022, Poseidon Principles signatories committed to aligning the framework with the ambition of the Paris Agreement to limit global temperature rise to 1.5 degrees above pre-industrial levels by 2100. The banks will measure their climate alignment against this ambition once a Paris-aligned trajectory or trajectories are identified and officially adopted by the signatories.

As part of measures  to ease traffic in the south-east during the festive season, the federal government has ordered the opening of the Second Niger Bridge for use for just 30 days.

The bridge was officially opened on Thursday midnight, while it would be  closed to traffic on January 15, 2023.

Babatunde Fashola, minister of works and housing, who gave the order on Wednesday at the inauguration of the bridge, said it will be opened for use for one month during the yuletide.

The Minister urged motorists plying the bridge to drive safely and responsibly in order not to defeat the purpose of constructing the project.

The federal government had announced last week that the project would be opened to traffic on December 15, 2022.

Speaking at the inauguration, Fashola said President Muhammadu Buhari’s purpose of completing the bridge was to save lives and alleviate poverty caused by wasted hours resulting from gridlock on the old First Niger Bridge.

He said the opening of the Second Niger Bridge would reduce the sufferings of commuters who always experienced traffic congestion during the yuletide.

“A lot of people have talked about a solution but the President Muhammadu Buhari-led administration decided to build the bridge whatever it took. So, wherever the funds came from, investment income, from our oil assets, repatriation of some funds that were stolen out of Nigeria came in from the US,” Fashola said.

“The result is now what we see. When people are talking about poverty, the biggest part of it is not the monetary poverty, is the multidimensional poverty.

“When you spend two to three days trying to cross a bridge, that’s poverty, because it should take just a few minutes so that you can go and do more productive things.

“The President approved that since the bridge is finished that we should create an access road so that during Christmas you can begin to experience what it would feel like plying the bridge.

“Let me be clear again; we haven’t finished construction work on the bridge but we would open it for people to use to relive the pressure from the one bridge. On the January 15, 2023, we would reverse that movement for those coming from the east to the west, according to  Fashola.