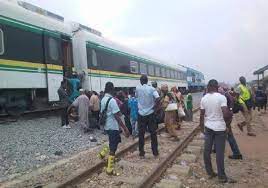 … As Abductors  Hold on to 2 Railway Staff

Twelve more passengers out of the lot  kidnapped on January 7, 2023, at Igueben train station in Edo State have been rescued by security operatives.But the kidnappers  were said to still be holding  on to  two Railways Staff , the Chief Station officer and the Senior Station officer.

This brings to 18 , the total number of passengers that have been rescued .

Commissioner of Police in  Edo State,  Mohammed Dankwara announced the operation in a Statement on Sunday.

The passengers were waiting to board a train to Warri in Delta State when the  armed  men struck.

The Commissioner of Police said joint security forces, acting on technical intelligence, stormed a forest named Igboha, laid ambush for the kidnappers , and freed the citizens unhurt, as they  were trying to move them from one location in the forest to the other .

Dankwara assured that security agencies are collaborating to free the government workers in captivity.