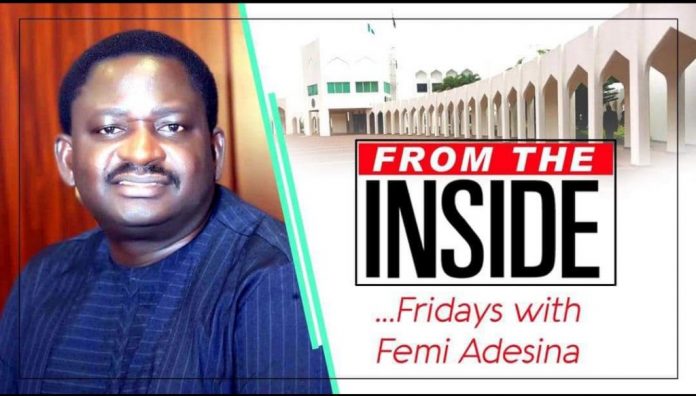 A prophet has no honor, except in his own country, says the Good Book. This was on display once again in Nouakchott, Mauritania, early this week when President Muhammadu Buhari stood ramrod straight to receive the Africa Award for Strengthening Peace, given at the 3rd edition of African Conference for Peace, organized by the Forum for Promoting Peace, based in Abu Dhabi, United Arab Emirates.

Was this not the same Buhari daily derided at home, excoriated and flagellated by some trenchant critics, who never see anything good in their country and its leadership? Again and again, that same leader has been receiving plaudits outside the country, celebrated and applauded by those who know the value of gold.

No wonder the Good Book urges us again not to cast our pearls before swines, lest they trample them under foot, and turn round to attack us. That’s how some vocal minority in Nigeria treat their President, but it by no means reduces his worth in the eyes of the majority of countrymen and women, as well as the international community.

Was he not sometime in recent past declared the Champion of Anti-Corruption in Africa by the African Union? Yet some caterwauling people never stop to assault the anti-graft battle at home. Oh, it’s selective. It’s ineffective. Blah, blah, blah. Didn’t ECOWAS make him Champion of the fight against COVID-19, with roaring success? Yet septics and cynics said nothing was done, even when Nigeria and West Africa defied the dark auguries that had been made about the pandemic.

Why was President Buhari given the African Award for Strengthening Peace, handed to him by world revered Shaykh Abdullah Bin Bayyah from Abu Dhabi?

President El-Ghazouni of Mauritania said he was singled out among other African leaders for providing good leadership and promoting peace in a multi-ethnic, multicultural and multi-linguistic country like Nigeria, and extending his experience and wisdom to other African countries.

Now, that’s the same Buhari that our so-called activists and political priests claim has divided the country more than at any other time. They simply see what they want to see, and say what suits their fancy, no matter how untrue.

In a private meeting with Shaykh Bin Bayyah later in the day, the renowned cleric said the Nigerian President, who has just about four months to the expiration of his second and final term in office, “will remain a symbol and icon, even out of power.” He invited Buhari to visit Abu Dhabi, whether in office or out of it, submitting that his wide experience would be appreciated in any society. Do the inveterate critics hear that?

On combating religious extremism as represented by Boko Haram in Nigeria, the Shaykh said President Buhari had done extremely well, “and it is something we must all do wherever such rears its head round the world.”

Yet, some armchair security experts, activists and those consumed by lust for power, impugn the war back home in Nigeria. They never see anything good in their own country.

President Buhari used the opportunity of the award to give some recipes for a safer Africa.

On religious extremism, he said: “This event is taking place amidst growing armed conflicts, exacerbated by extremists’ ideology rooted in misinterpretation of religious precepts, and of course widespread deprivations of the citizens of Africa and other parts of the world. These sad developments have, for many decades, become worrisome that they preoccupy all governments and well-meaning organisations, as well as individuals in Sub-Saharan Africa and beyond…

“Global terrorism, banditry and other trans-national crimes continue to pose enormous challenges not only to Africa but to global peace and security. These phenomenon have become perennial threats to sustained economic development and growth. Nigeria and other regional bodies in Africa and the rest of the world are working assiduously to deal with these threats to the very existence of humanity. For us in Nigeria, we continue to engage bilaterally and multilaterally to comprehensibly win the war against the Boko Haram insurgency and other related terror groups through kinetic and non-kinetic approaches.

“When I assumed power in 2015, Boko Haram held about two thirds of Borno State, half of Yobe State, and a couple of Local Government Areas in Adamawa State, all in the North-East of Nigeria. We have been able to retrieve these swathes of territories by investing over a $1 billion dollars to acquire hard and software weaponry from the US and other friendly countries to carry out sustained operations against insurgency since 2015.”

On climate change and impact on insecurity: “Similarly, the shrinking of the Lake Chad has resulted in dire consequences for people of the region losing their traditional source of living which culminated into the youths being recruited by the terrorist groups who are seeking for means of livelihood occasioned by difficult economic conditions. This scenario created serious instability and served as a litmus test for member countries of the Lake Chad Basin Commission (LCBC) in devising means to restore the livelihoods within the region.

“As a corollary to containing this development, the LCBC has begun implementing programmes to safeguard the ecosystem of the basin, including seeking global support to return the lake to an economic hub it was known for in the past.”

On other external impacts: “Although, we are winning the war, however, as a country and sub-region, we continue to be negatively impacted by events in Libya, Central Africa Republic, the Sahel and the war in Ukraine. Our region, is awash with all sorts of small and light weapons that continue to be freely in circulation, orchestrated by the impact of foreign fighters. We must, therefore, support peace initiatives to bring political stability in crisis ridden areas such as Libya, Central Africa Republic and other parts of the Sahel region in order to discourage the spread of insurgency, other criminal groups, as well as arms and foreign fighters in these locations and continent-wide.”

To conclude his address, President Buhari aligned himself with the Declarations reached at the two previous editions of the Conference and enjoined the Forum, to give premium to the following:

ii inculcate values and principles of tolerance and peace in educational institutions, and particularly, by our youths;

vii. Concretise efforts towards the curtailment and possible prevention of the circulation of Small Arms and Light Weapons, as well as the festering of foreign fighters into the African continent;

viii. the imperatives of the next Summit of the African Union, to take a holistic review of the challenges that continue to fester in Libya with the hope of finding pragmatic African approach to resolving the over a decade-old instability in Libya that has made that country a safe-haven for all kinds of weapons and foreign fighters whose profound impacts stare us all in the face in our sub-regions and Africa.

His final words: “It is my strong belief that if we are able to re-commit ourselves to going in these directions with our strong political will, Africa would be the better for it.”

Our President did us proud in Nouakchott. Winner of Award for Strengthening the Peace. And truly, he will remain a symbol and icon, in and out of office.

*Adesina is Special Adviser to President Buhari on Media and Publicity